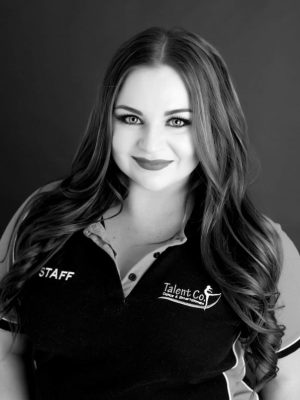 Taihla has been dancing and competing for 16 years starting at the age of 3 at the Gail Meade Performing Arts Centre. Here she completed all C.S.T.D. exams in Theatrical Jazz, Tap and Classical Ballet, receiving Honors plus (95%+) for most of these exams. Taihla has also completed all RAD Classical exams to the Advanced level receiving a distinction or high distinction for all of these exams. Taihla has been competing in state and national competitions since the age of 6 receiving numerous placings and awards throughout the years including Dancer of the Festival in 2007 and 2009. In 2007 Taihla was chosen out of 65 other competitors to compete as a finalist for the Under 16 modern championships in Melbourne receiving an honorable mention. In 2007 at age 15 Taihla auditioned for the role of Victoria, the lead dance role in CATS The Musical. This entailed three months of rehearsals, four times a week and resulted in 24 performances at the Regal Theatre in Perth. This was a fantastic experience for Taihla and a massive stepping stone in her career. In 2008 Taihla started classes under the direction of Raquel Muir at The Performance Company, learning as many different styles of dance as she could. Taihla considers herself a very versatile dancer having spent her years of training studying all styles of dance including; Jazz, Tap, Ballet, Contemporary, Hip Hop, Acrobatics Lyrical and Singing. Taihla has travelled all over Australia doing classes and workshops to help further her knowledge. Taihla started teaching at Talent Co in 2005, teaching all ages and styles. Taihla loves teaching and hopes to pursue a career in freelance choreography. Taihla has always had a love of dance and knows that dance will always play a big role in her life and career. Taihla believes her hard work and determination has given her great results as a student and a teacher and want to continue to learn more about the dance industry via further study and working with many different teachers and choreographers. Taihla spent 2012 in Sydney studying and working with the Urban Dance Centre, performing at professional shows and commercals including 'The Voice' and 'The Apprentice' also teaching at 'Nikki Webster's School of Dance'.